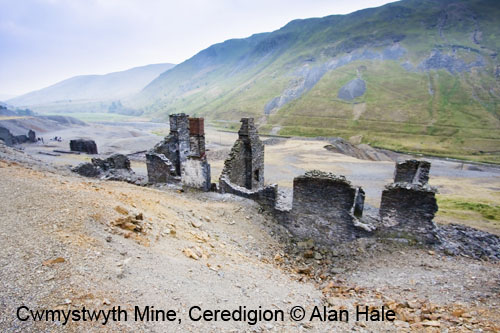 Once Wales probably supported a significant assemblage of lichens associated with  natural outcrops of heavy metal-rich rock.  Due to the destruction of these outcrops by our mining activities the  survival of metallophyte lichens is now almost entirely dependant on the  conservation of old metal mine sites.

Two special types of lichen are almost completely confined to these sites in Wales:-

1. Obligate metallophytes. Those  lichens that appear to in some way require heavy metals and only occur on heavy metal-rich substrates.

2  Facultative metallophytes. Those  lichens that tolerate heavy metals but  can be found elsewhere in sites without  such metals. Most of these species are probably poor competitors but can survive  extreme conditions.  In Wales they are mostly confined to metal-rich sites but also occur, for example, on exposed peat on the summit ridges of high  mountains.

The  following species fall into one or other of these categories in Wales and any threatened site supporting more than 3 of these species should be subject to a detailed assessment: