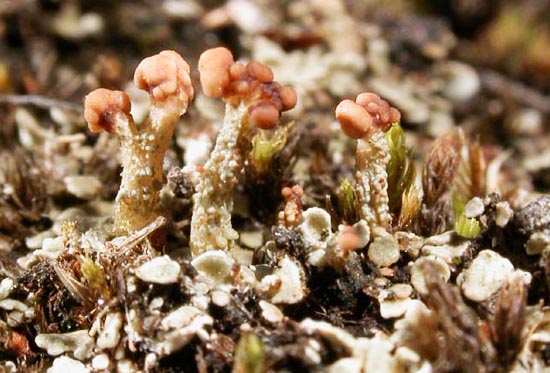 C.peziziformis forms cushions of loosely aggregated, small, rounded-auriculate, greyish-green squamules. It could be confused with the juvenile squamules of a wide range of other heathland Cladonia species but these tend to be more variously marginally incised (sometimes with sorediate or granular-edges), sometimes brownish, erect or decumbent, and less organised. When fresh in the field its squamules can have something of the look of a diminutive grey Omphalina hudsoniana. When fertile it is unmistakeable. It most closely resembles C.cariosa but that species occurs on dry and free-draining, sandy ground, on calcareous substrates, and often on metal-polluted soils. The podetia of C.cariosa are taller ((0.5-) l-2(-2.5)cm), more strongly lacerated and have branched corymbose clusters of dark brown apothecia. In C.peziziformis the podetia are shorter (to ca. lcm) with a single turban-like, paler brown apothecium, or weakly branched with l-2(-3) terminal apothecia.
Drawings: Alan Orange
C.peziziformis is Pd+red, K- (or murky brown); C.cariosa is pd- or +weak yellow, K+y (atranorin). Squamules of both species can have large, sessile, dark brown-black, barrel-like pycnidia, preceding the formation of podetia.
Habitats

C.peziziformis is a terricolous lichen of open, shallow peaty or sandy ground in oceanic lowland and submontane heaths (Orange 1996; Purvis et al. 1992). The vast majority of records are from heathland within a short distance of the coast and the species displays a pronounced 'L-shaped' southerly and westerly distribution in Britain, mirrored by certain Atlantic pteridophytes, such as Dryopteris aemula and Hymenophyllum tunbrigense. The species is intolerant of phanerogamic competitors and appears to have a requirement for bare ground exposed during heath fires. It is possible that the trophic conditions provided by plant ash nutrients released in the aftermath of burns play some role in its ecology and life history and perhaps trigger its appearance from a spore or conidial bank in the soil, though no experimental work has been carried out to investigate this. Nothing is known of its long-range dispersal capabilities. Whether or not disturbance by fire is a prerequisite is also unknown, but recent finds here and in Europe have all been associated with burnt ground. Where C.peziziformis is found the ground typically has a thin peat covering with a significant sandy or mineral fraction. Some sites are associated with igneous geology and nutrient balance appears to be a key factor in the ecology of the species. In this respect it appears to have ecological similarities with Placynthiella oligotropha but occupies more or less constantly humid, cooler and much less xeric niches.

Records from Wales (some older and poorly-localised records have been ommitted):

Dowrog Common, near St David's, Pembs: The first find of this species in Wales was made here by Alan Orange in 1989 . It was noted as being frequent over an area of ca.1400m on bare peaty patches in
burnt heathland. Associates included Calluna vulgaris, Erica tetralix, Molinia caerulea, Ulex gallii and Campylopus introflexus. It was only seen at this one place on the common and it was suggested by Alan Orange it would be likely lost as the vegetation recovered from burning. It has not been seen since. Ray Woods searched briefly and unsuccessfully for it in 1999 and concluded there appeared to be no suitable habitat. There is a voucher specimen in NMW.
South Stack, Anglesey:
Threats and Status

Sterile thalli could be overlooked, though the specialised habitat and UKBAP-raised profile means it has attracted increased awareness and it is high on any lichenologist's 'wish list' when working coastal heath. Consequently it is unlikely to be seriously under-recorded.