This is not one of the easiest lichens to identify with total certainty. Unless it is fertile - and I am not sure it has ever been found fertile in Wales -i t may be necessary to subject a small sample to thin layer chromatography to provide certain identification. Nevertheless a fair degree of certainty is possible given the restricted habitat of this species and the limited range of possibilities.

It grows only in the driest of bark crevices about the root plate and lower trunks of ancient oak trees. The thallus is white and powdery and all chemical tests are negative. The medulla glows a yellowy glaucous green in UV light. Scattered over the thallus and looking like it has been liberally sprinkled with pepper are rusty brown specks. These may be apothecia initials that never develop any further. They are colourless within and brown on the outside and in K turn a dark greenish colour.
It could be confused with Arthonia pruinata but this lichen is C + red. L. lyncea is UV + ice-blue and lacks the brown flecks. Schismatomma cretaceum forms starky white extensive patches that also lack the brown flecks. S. niveum has a pink thallus with a Pd+ bright orange-yellow reaction. (RGW) 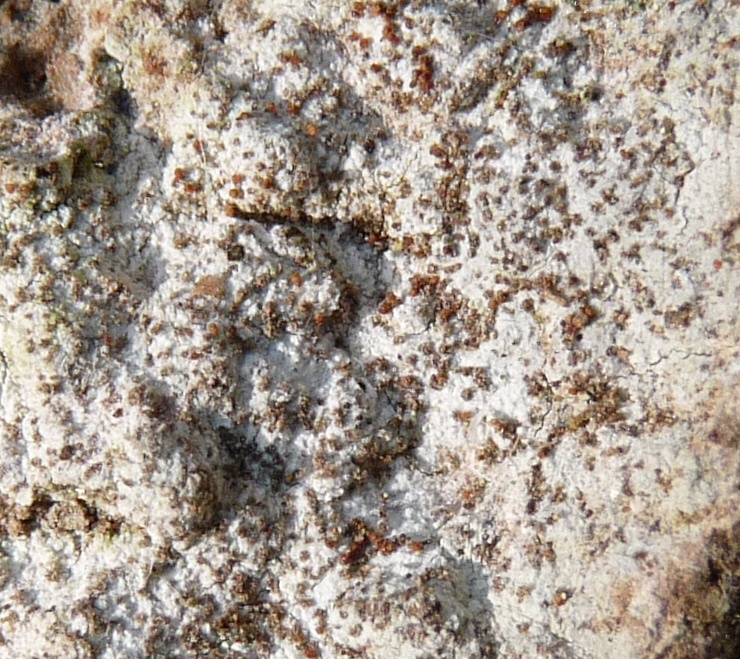 As indicated above this is a lichen that grows only in the driest of bark crevices of the root plate and lower trunks of ancient oak trees.

All its six known Welsh sites are in Powys. Most are concentrated on ancient pasture woodland oaks in the lower Elan Valley and then down the Wye Valley and into its tributary valleys of the Dulas at Cwmbach and  the Ennig in the BBNP near Talgarth. Elsewhere the only known locality is in the Great Wood at Gregynog in Montgomeryshire. In Southern England it is a scarce species of ancient deer parks and ranges from Trelissick Park in Cornwall in the west to Dorset in the east, with a concentration of records in the New Forest. There are also a few records from Cumbria. It is a scarce but widely reported species in Scotland with a scatter of records from the Southern Uplands and from just south the Moray Firth. There are very few records from Ireland due to the great paucity of ancient trees there. Elsewhere in the world it is reported from Europe, the Canary Islands and N. America. (RGW)

In most Welsh sites it is known from a single tree. It is therefore at risk from the loss of the tree through collapse or by being felled. Some sites have no trees in the immediate vicinity that offer a suitable niche and with no obvious means of reproduction in the absence of fully formed apothecia it may be dependant on animals to transport it from tree to tree.

A cessation of grazing or other form of management that keeps dense vegetation from encroaching around the tree bases could lead to colonies being smothered. It is also prone to eutrophication should large numbers of stock congregate around the tree base.  Four out of six sites are protected by SSSI designation and all sites are believed to sympathetically managed.