Currently, only three or four people currently resident in Wales can be considered lichen “experts” i.e. have the full range of skills necessary to carry out site surveys, identify the full range of taxa occurring in Wales (over 1500), and advise on management of lichen species and assemblages. None of these experts are under the age of 50. In addition, only a handful of experts (also mostly in older age brackets) are active in the rest of the UK. This is against a background of an increasing recognition of the ecological and biodiversity significance of lichens (69 species and 2 communities are now listed on the Section 42 list for Wales) and a large suite of lichen SSSI Features in Wales to be managed for and monitored. There is also an increasing demand for capable lichenologists to carry out Environmental Impact Assessments in relation to development proposals. 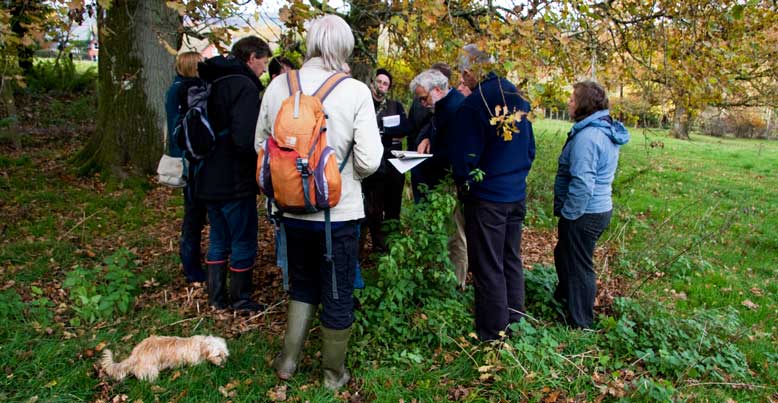 In recognition of the above issues, the Welsh government in 2009 agreed to a suggestion from Ray Woods of Plantlife that a "lichen apprentice"scheme be established in Wales. The concept of lichen apprentices was first developed in Scotland, with some considerable success. There, seven "apprentices" were funded by bursaries for a total of three years, working alongside experienced lichenologists. In Wales, only very small amount of funding (to cover books and basic equipment) has been provided, and  there are no bursaries available. The ‘apprentices’ have been drawn mainly from the public sector - Natural Resources Wales (NRW), Welsh Government (WG). Local Authorities etc. - and they have been allocated time in their work programmes to pursue this specialised training.

The three Welsh experts acting as trainers are: Ray Woods (freelance licehnologist), Steve Chambers (Welsh Government) and Alan Orange (National Museum). Alan Hale (NRW) is coordinating the project. Training is taking the form of lecture-room/laboratory workshops, and field work days with smaller groups. It is envisaged that some of the field work will be targetted at lichen species on the Section 42 list, and at lichen “Features” on SSSIs.

Expertise in lichenology cannot be obtained overnight, in a few days or even weeks. The existing experts have spent many years developing their skills. However, a start has to be made somewhere. The hope is that this project will work in a “pump-priming” way – that it will stimulate an interest in learning about lichens and give people some basic skills and knowledge which they would, if they so wished, be able to develop further. It is expected that only a small proportion of those becoming lichen “apprentices” will go on to become experts; however, even those that do not will hopefully have developed at least an awareness of the conservation requirements of lichens and an ability to carry out preliminary assessments of sites for their lichen importance.